The Ninth Circuit recently affirmed an order compelling individual arbitration of deceptive pricing claims in a putative class action against Amazon. See Wiseley v. Amazon.com, Inc., No. 15-56799 (9th Cir. Sept. 19, 2017). The decision is notable because it rejects a number of arguments that are often made by would-be class representatives who hope to avoid arbitration agreements, and—like a recent Second Circuit decision involving Uber’s Terms of Use—recognizes that online consumer contracts can be enforced so long as notice is conspicuous and acceptance is unambiguous.

As in most deceptive pricing suits, the Plaintiff alleged that Amazon had falsely advertised and fraudulently misrepresented merchandise because its reference prices—e.g., “was” prices, “sale” prices, or crossed-out prices—were higher than prevailing market prices within the last three months. See Cal. Bus. & Prof. Code § 17501 (“No price shall be advertised as a former price . . . unless the alleged former price was the prevailing market price . . . within three months next immediately preceding the publication of the advertisement or unless the date when the alleged former price did prevail is clearly, exactly and conspicuously stated. . . .”). Instead, the Plaintiff alleged, Amazon “cherry-picked” the highest price it could find in order to create artificial demand by inflating the difference between the sale price and reference price. The Plaintiff claimed that he was injured by this practice because he paid shipping charges that he would not have paid if he had purchased the same product at the same price at a brick-and-mortar store.

Amazon moved to compel individual arbitration of the Plaintiff’s claims based on the written arbitration agreement in its Conditions of Use. Its Motion to Compel explained that the Plaintiff was presented with a notice of and link to the Conditions of Use on at least two notable occasions, the first being when he registered for an account and clicked on a “Create account” button: 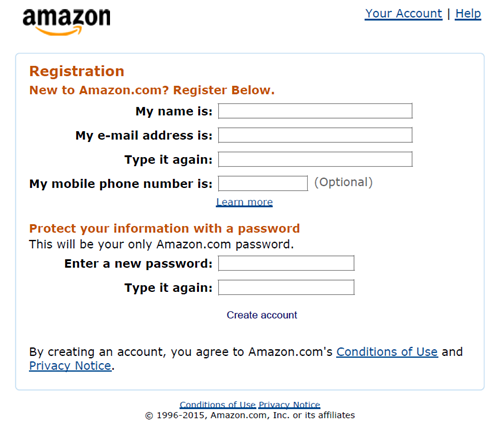 The second was when he confirmed his order by clicking a “Place your order” button:

Below the “Create account” button and above the “Place your order” button were similar notices—both with hyperlinks in contrasting blue text—that told the Plaintiff that clicking the buttons not only created an account and placed an order, but also acknowledged Plaintiff’s acceptance of the Conditions of Use.

The Conditions of Use required that, except for actions to “enjoin infringement or other misuse of intellectual property rights,” any claims “relating in any way to your use of any Amazon Service” or “any products or services sold or distributed by Amazon or through Amazon.com” would be resolved in individual arbitration or small claims court. It also obliged Amazon to pay all arbitral fees and costs (unless a claim exceeded $10,000) and waived Amazon’s right to any attorneys’ fees and costs (unless a claim was frivolous). Finally, it contained a change-in-terms provision that allowed Amazon to amend its terms in the future.

The Ninth Circuit affirmed the trial court order compelling arbitration and dismissing the action. It began by addressing whether the agreement’s enforceability was governed by California law (as urged by the Plaintiff) or Washington law (as stated in the Conditions of Use, urged by Amazon, and found by the trial court). It ultimately agreed with Amazon and the trial court that “applying Washington law” would not be “contrary to a fundamental policy of California law” because their “laws and protections against unconscionable contracts appear to be substantially similar,” and “any distinction does not bear on this case, as we would reach the same result under California law.”

The court next found that, although necessarily “adhesive in nature,” the Conditions of Use had no other “indicia of procedural unconscionability.” As for the presentation of the agreement generally, the court found that the notices on Amazon’s registration and checkout pages were “in sufficient proximity” to the action buttons “to give [Plaintiff] a ‘reasonable opportunity to understand’ that he would be bound by additional terms.” And as for the presentation of the arbitration provision specifically, the court found no procedural unconscionability there either, as it “appears in the same size font” as the rest of the agreement “with key terms bolded.” Finally, the court rejected the notion that the agreement was invalid because it “was unclear which rules would apply” in arbitration.  Although the agreement referenced an outdated version of the AAA rules, the court found that the Plaintiff had a “reasonable opportunity” to determine which rules would apply, and in any event “could [have] call[ed] the provided phone number to resolve any lingering uncertainty.”

Finally, the found that the three specific provisions the Plaintiff had challenged were not substantively unconscionable. First, it rejected the notion that the change-in-terms provision—which allowed Amazon to modify the agreement unilaterally—was unconscionable. This did not render the agreement illusory or otherwise unenforceable, the court found, because Amazon’s ability to modify the agreement was tempered by the implied covenant of good faith and fair dealing. Second, it held that exempting certain intellectual property claims from the scope of the arbitration agreement was not “overly harsh or one-sided,” particularly because the exemption was designed to protected Amazon’s “legitimate business needs.” Third, the court found that the provision allowing Amazon to recover its attorneys’ fees if a claim is deemed frivolous was not unconscionable because both Washington and California permit defendants to seek fees as a sanction for frivolous filings. And as for the fees in general, the court held that the Plaintiff had not shown that they “would be unaffordable” or “have a substantial deterrent effect in his case.” Notably, the court declined to address provisions outside of the arbitration agreement, as challenges to such provisions are for an arbitrator to address in the first instance.

The Ninth Circuit’s no-nonsense decision recognizes that, under basic principles of contract law, online consumer contracts may be enforced so long as notice is conspicuous and acceptance is unambiguous. It is an important win not only for Amazon (which was the subject of deceptive pricing studies from Consumer Watchdog in March and July of this year) but also retailers generally (which continue to be targeted in deceptive pricing class actions in California).

Ashley M. Super is an associate at Drinker Biddle. She represents a range of clients in civil and criminal litigations at both the trial and appellate level.